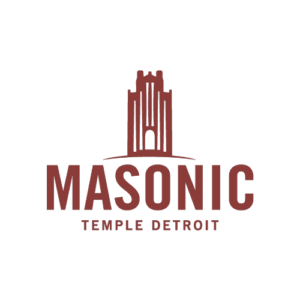 Detroit – September 15, 2022 – The iconic Masonic Temple Detroit, located at 500 Temple near the District Detroit, will host the centennial celebration of its cornerstone laying on Saturday, September 24, 2022. The events will occur 100 years later to the day in homage to the 200,000 people who gathered with local and national dignitaries in Detroit for the building of the world’s largest Masonic Temple. The September 24 celebration includes a rededication ceremony open to the public at 5 p.m., followed by a red-carpet gala (tickets required) within the Temple’s newly restored Fountain Ballroom, which will be unveiled that night. Steve Genther, who has been with the building for 40 of the 100 years, is eager to share the momentous evening with the community.

“The Masonic Temple Detroit is an architectural marvel and national treasure that deserves mention among the country’s most storied structures,” Genther noted. “We are delighted to recall its significance on the 100th anniversary of its founding and reintroduce the Masonic Temple back into the conversation as a Detroit landmark and stunning event space, unparalleled in size and design magnificence.”

The event on September 24 promises to be a once-in-a-lifetime experience. From current Masons dressed in their tuxedos and tops hats, to the commandry wearing their formal uniform with feather chapeaus as they did in 1922 – plus the display of George Washington’s trowel that was used to set the original cornerstone, as well as the White House – the atmosphere will be one of pomp, nostalgia and enthusiasm for the next 100 years.

Within its 1,037 rooms, the Masonic Temple has two theaters, two ballrooms, a drill hall, a gymnasium and many conference spaces.  The Fountain Ballroom’s recent renovation by Detroit-based Maddalena Design, includes a spectacularly restored private entrance tunnel and foyer.  The original color scheme has returned, with historically accurate crystal chandeliers. The Fountain Ballroom, with the capacity of 2,000 guests, once held one of the original auto shows in the City of Detroit.  In the 1950’s, the fountain itself was hidden within a wall.  It was recently rediscovered and is in the process of restoration, in partnership with Maddalena Design and Pewabic Pottery. The Masonic Temple’s Crystal Ballroom, appropriately named after the 15-foot chandeliers, can comfortably hold 300 people for a seated event. Hosting up to three weddings per weekend, the Crystal Ballroom has proven to be a popular wedding destination, with bookings nearly two years in advance.

As the Masonic Temple looks forward to the next 100 years of living history in Detroit, the public is welcome to attend the outdoor rededication ceremony at 5 p.m. on September 24 near Cass Park at 500 Temple. The red-carpet gala is from 6 p.m. to midnight and features music by The Next Generation Funk Brothers, Ralph Armstrong Trio, and DJ Rock’em. Tickets start at $100 and include dinner, open bar, music, and dancing throughout the evening, as well as valet. Tickets and more information available here.

About Masonic Temple Detroit
Over the past 100 years, the Masonic Temple Detroit has hosted some of the nation’s most musically significant acts, including Prince, Ella Fitzgerald, Snoop Dogg, and The Rolling Stones. Recent acts, presented in partnership with AEG Presents, include Jack White, Judas Priest, and Olivia Rodrigo.

Whether it’s one month, one year, or one decade after experiencing domestic violence, sexual violence, or human trafficking, Turning Point is here.

Thanksgiving eve can get a bit crazy out there - some things to think about when out and about tonight!
https://www.mosscolella.com/blog/biggest-bar-night-of-the-year